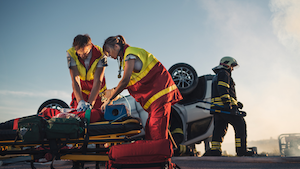 Catastrophic injuries are categorized as “catastrophic,” not just because of their severity, but also due to the permanent impact that these types of injuries can have on a victim. Maurer Law represents motor vehicle accidents victims and their families in obtaining the financial recovery they are owed from the liable parties.

A Fayetteville catastrophic injury case can be more complicated to prove than other North Carolina motor vehicle accident cases, which is why you need someone like Attorney Mike Maurer representing you. He and his firm are known for taking on the hard-to-win cases that many other Cumberland County traffic injury lawyers have turned down and achieving excellent results for his clients.

Whether it is someone who sustained a traumatic brain injury (TBI) in a car collision or a motorcyclist who suffered first-degree burns after getting hit by a semi-truck, the victim’s life, as well as the lives of their family members, will have been irrevocably altered.

Examples Of Other Catastrophic Injuries Sustained in Cumberland Traffic Crashes:

Fayetteville catastrophic injury attorney Mike Maurer was both a former police detective and insurance defense lawyer. He now utilizes all that experience to zealously advocate for his catastrophic injury clients. He has the knowledge and skills to:

A Former Insurance Defense Attorney Now Zealously Advocating For You

We know that the injuries suffered are never the whole picture and there can be other lasting effects on the victim. A construction worker who suffered permanent nerve damage in an auto accident on I-295 may no longer be able to work to support his family. A family whose young daughter suffered severe burns after being hit by a drunk driver on Campbell Avenue will now have to contend with costly medical care while they help their child cope with her pain and suffering. Maurer Law takes all this into consideration when making sure that our clients receive the personal injury compensation they are owed.

We represented a young lady who was severely hurt on NC 210 in Lillington, NC. Our client was riding her friend's car when the friend had to suddenly swerve to avoid a tractor-trailer, which was making an illegal U-turn and blocking all lanes of traffic. Even worse, it was dark outside, with no streetlights, and the 18-wheeler did not have its lights on.

Due to the quick actions of our client's friend, they avoided contact with the large truck and crashed into a concrete culvert instead. While the impact into the culvert was much less than what it could have been had they hit the truck directly, it was severe enough to cause our client catastrophic facial injuries and a mild TBI —all of which were legally attributable to the trucker for setting in motion this chain of events.

Even though our client's injuries were severe, she did not have the financial means to obtain proper medical care. Because of this, the treatment she received was minimal and her medical bills were low. As a result, the defendant's insurance company did not take our client's case seriously.

Our North Carolina catastrophic motor vehicle crash law firm then did what we do best. We fought for our client all the way to the courthouse and presented it to a jury of twelve. We explained to the jury that catastrophic injuries can take different forms and do not always fit into a traditional mold, nor do they necessarily have to involve high medical bills or economic damages. We showed through witnesses (past employers, friends, and doctors) all the ways in which the facial scarring and brain injury had affected our client's life in the three years since the accident.

After a 6-day jury trial in Cumberland County Superior Court, the jury found in favor of our client and awarded her a substantial sum to compensate her for the harm she suffered. Some lawyers later commented that this was one of the best trial results they had ever seen given the minimal medical bills and treatment.

That the jury found our client to have no fault whatsoever in causing her injuries was crucial because North Carolina is a “contributory negligence” state. This means that if a victim is determined to have been even a little at fault, they are not entitled to any damages.

Maurer Law represents Fort Bragg personnel and their families in their catastrophic motor vehicle injury lawsuits in Cumberland County and throughout North Carolina. Attorney Maurer is knowledgeable about the laws governing military personnel when it comes to catastrophic injury claims and he will zealously advocate on your behalf to achieve the best outcome possible. Our Fort Bragg injury law firm represents active military members, veterans, reserves, and their families.

In Fayetteville, Fort Bragg, Eastover, Linden, Wade, Godwin, and the surrounding areas, call Maurer Law at 910-714-4323 or contact us online.