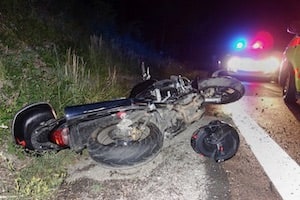 Maurer Law has represented a number of motorcycle injury victims in Fayetteville and the surrounding cities of Cumberland County. Unfortunately, with only a helmet as protection, motorcycle riders are at risk of suffering the most catastrophic kinds of injuries that can occur in traffic collisions.

The road to recovery for motorcycle crash victims can be long and painful. For many survivors, their lives may never be the same, especially if a traumatic brain injury (TBI), a spinal cord injury (SCI), severe disfigurement, burn injuries, permanent disability, or other life-altering injuries were sustained.

Led by Fayetteville, North Carolina motorcycle accident lawyer Mike Maurer, we represent injury victims and their families in pursuing compensation and other damages from the parties responsible for causing the collision. Maurer Law also represents families who have lost loved ones in Cumberland County motorcycle crashes and are pursuing wrongful death claims. Call 844-817-8058 today to request your free case consultation.

Although it is motorcyclists who usually get an unfair rap as the ones who tend to be reckless on the road, the majority of motorcycle crashes are caused by the actions of the other parties involved. This inaccurate bias toward motorcyclists has been known to unfairly impact the way that some police, insurers, and even judges and juries may view any evidence. It can even negatively sway the outcome of a settlement or verdict. This is just one of many reasons why you need an attorney experienced in handling motorcycle claims in the Fayetteville area and who will zealously advocate for you.

Attorney Maurer used to be a defense lawyer for insurance companies and also a former police detective. He is familiar with all of the tactics that insurers will use to try to avoid paying damages while placing the blame on the motorcyclist. Not only does he know how to defend against such maneuverings, but also he can protect his clients.

Proving that a motorcycle rider holds no blame whatsoever in causing their injuries is especially important in North Carolina, which is a “contributory negligence” state. Under this legal theory, if the injured party is found to have played even the slightest role in causing the accident, they cannot recover anything in a Fayetteville motorcycle crash case. This is why Maurer Law always conducts its own investigation at the scene rather than relying on the results of a police investigation. We can’t tell you how many times we’ve caught errors in an accident report that could have been to the detriment of a client.

Some Common Causes of Motorcycle Crashes

Although the reality is that motorcycles can be more difficult for oncoming traffic to see simply because they are smaller in size in comparison to a passenger vehicle or truck, this does not mean that other drivers are exempt from having to pay attention to motorcyclists. Maurer Law recently represented the victim of a motorcycle accident in which our client was a passenger on her friend’s motorcycle.

While the motorcycle was not actually hit by the car, our client’s friend saw the car barreling toward him from the rear on Bragg Boulevard. As a result, the friend, hurried to get out of the way, but unfortunately, in the process, our client was thrown from the bike and sustained severe injuries.

We represent Fayetteville, NC motorcycle accident victims and their families against negligent motor vehicle drivers, uninsured and underinsured motorists, trucking companies whose drivers caused the crash, and the entities who failed to repair road defects or clear away hazards from freeways. Attorney Maurer is not afraid to go up against large corporations and their insurers if it means making sure that his clients get the compensation that they are owed for their pain and suffer, lost wages, medical expenses, property damages, and other costs. In some cases, punitive damages may be warranted.

Maurer Law has a reputation for taking on the “too hard” cases that other law firms have turned down and achieving excellent results for our clients. We only represent a select number of cases at a time so that we can dedicate our full attention, time, and resources.

Located close to Fayetteville, Fort Bragg is one of the largest military installations in the United States. Because of this, the city has become the home of many military members, reserves, veterans, and their families. Fort Bragg motorcycle crash attorney Mike Maurer knows that the process of submitting an injury claim and obtaining financial recovery is not the same for military members as it is for civilians. He is knowledgeable about the laws that apply, the distinct circumstances that may arise, and how to navigate them.

To request your free case consultation with Maurer Law in Fayetteville and the surrounding area, call 910-714-4323 or email mike@maurerlawpa.com. To find out what our clients have to say about working with us visit our testimonials page.